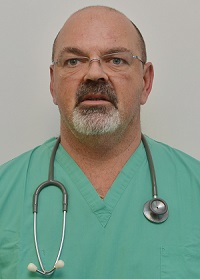 Dr. Rikard Lenz was born in Dubrovnik in 1967. Zagreb Medicine University he graduated 1992, and started working in Dubrovnik General Hospital, first as a doctor in the ER, and than in 1994 as a resident of Anesthesiology and Intensive care. At the same time, he served as a Doctor in Croatian army during the war.
He become a Specialist of anesthesiology, reanimation and intensive care in 1998. Two years later he was chosen to be Head of the department. In 2001. in addition to his duties as head of the anesthesiology and intensive care department he become a Assistant Manager for QQ until 2004.
In June 2006. he was chosen to be Assistant Manager of General Hospital Dubrovnik and since then he is organising all of the medical activities in Dubrovnik hospital.